featured image: Edmon de Haro, published with the article “Here’s What Will Truly Change Higher Education: Online Degrees That Are Seen as Official” in the New York Times on March 5, 2015

Our country is anxious about the future of higher education. There is a disconnect between what academic leaders feel they’re doing–preparing students for the workplace–and what is actually happening with graduates–entering into the working landscape that is one-third freelancers, independent contractors, and temporary workers (jobs that don’t allow workers to fulfill their capacities and don’t pay enough or provide benefits) with an average of $30,000 in debt.

What is going on?

The workplace is changing. New technology and automation eliminate more jobs than they create. Work is stressful and unrewarding and negativity spreads to coworkers, but workers take off less and work longer to avoid cutbacks. Business leaders are not getting college grads with the skills needed for the workplace.

3 perspectives: the first stems from the conviction that the top priority for America’s colleges and universities should be to prepare students for good jobs. The second is based on the view that the mission of educators should be to develop effective citizen leaders, and the third focuses on the role of colleges and universities in driving social and economic development in their local communities.

Here are the opinions of those who attended the forum: 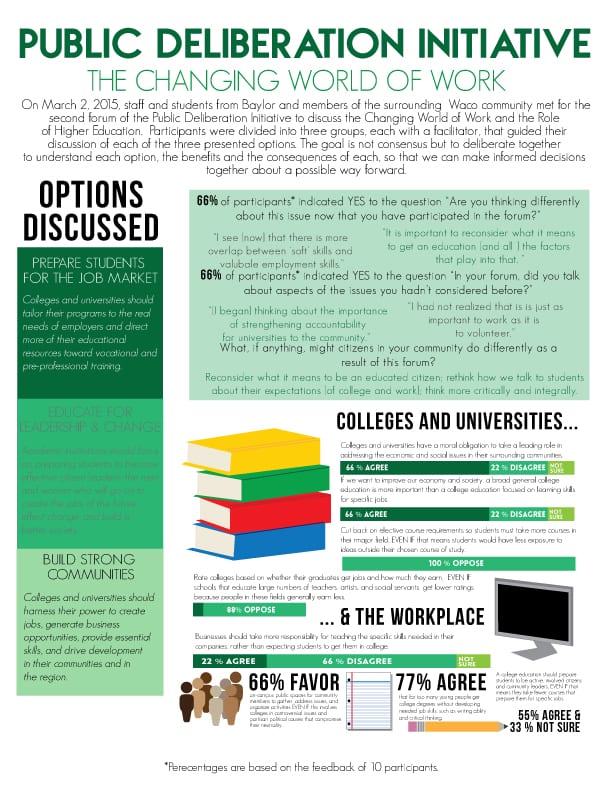